seARTS is pleased to announce the Award categories for the 2017 Celebrate Wearable Art IV show for looks to be seen on the runway.  There will be three VIP judges who will review looks as they are on the runway and awards will be given out at the end of the show.   These awards will be supported through cash and in-kind donations.

The seARTS Best in Show - Sponsored by J. Barrett & Co.

Awarded to the Artist with the design considered by the judges to be the most exceptional overall.

Coastal Inspiration Award Awarded to the Artist with the design considered by the judges to be the most inspired for its movement, form, and texture of the coastline - Sponsored by Flagship Motorcars of Lynnfield|Mercedes-Benz

Awarded to the Artist with the design considered by the judges to be most innovative and made from "green friendly" materials that would otherwise be discarded.

Architectural Award - Sponsored by Epstein-Joslin Architects and the Hamilton Group

Awarded to the Artist with the design considered by the judges to be the most inspired by the concept of wearable sculpture incorporating structure, shape, and form

This award crosses all categories and is awarded to a student Artist with the design considered by the judges to be the most exceptional.

The Society for the Encouragement of the Arts Cape Ann presented seven awards at its biennial Celebrate Wearable Art runway show  September 27, 2015.

The judges each represented an important aspect of the show.  The panel included: Michelle Tolini Finamore, Curator of Fashion Arts at the Museum of Fine Arts, Boston; Claire Sanford, Metalsmith, owner of Top Dog Studio, and President of the Board at the Haystack School in Deer Isle, ME, and Tracey Rauh, Managing Editor and Special Project Director for the North of Boston Media Group.

The Awards included cash for the top three winners and were  sponsored by BankGloucester and Top Dog Studio. Art groups involved in the show donated free passes to the recipients.  These included the Museum of Fine Arts, the Cape Ann Museum, and the Society for Arts and Crafts, Boston.

The Awards were presented as follows: 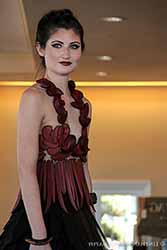 Best of Show was presented to Rick Crangle Gloucester based wood sculptor and architectural specialist, who presented a magical woodland look that reflects his inspiration from the delicate layering and movement of a raven’s feathers.  The look was modeled by Allison Campbell, an Endicott student who is also an intern at the Marblehead Art Association.  This garment has over 500 individually hand cut, shaped, sanded, ebonized, and oiled wood elements. The full length skirt’s cherry “feathers” are upcycled from a wood staircase in Cambridge.

Best Runway FASHION Design was presented to Redat Davison, of the Rhode Island School of Design. The piece included a strapless fitted crop top with fitted ankle length pants draped in a flowing skirt that is open at the front. The designer used pleating to highlight specific elements of the design as well as created a balance through the use of parallels.

Honorable Mentions were given to these artists in across the categories.

Best of Show Honorable Mention was given to Barbara Poole for her collection that included “Invasive Species/Unintended Consequences” a garment that depicts the destruction of the Californian landscape due to pollution. Poole collaborated with a scientist to create the statement, made from 100% organic Merino wool and Shibori hand-dyed wire. The other two looks, called “Skin and Bones,” were hand-dyed, printed silk chiffon and habotai silk that incorporating vintage x-rays. Each garment was seamlessly created without the aid of sewing and relies on mathematics for fit and form.

Best Fashion Honorable Mention went to Abby Griswold from Rhode Island School of Design. The floor-length, black and white gown had a structured shoulder element reflecting the shapes found throughout the print. The white portion of the dress was created using the negative white spaces within the print. A patch-working technique and added trim enhances the shapes.

The Judges Choice award went to Selina Narovlansky for her runway collection of hand-painted silk creations.